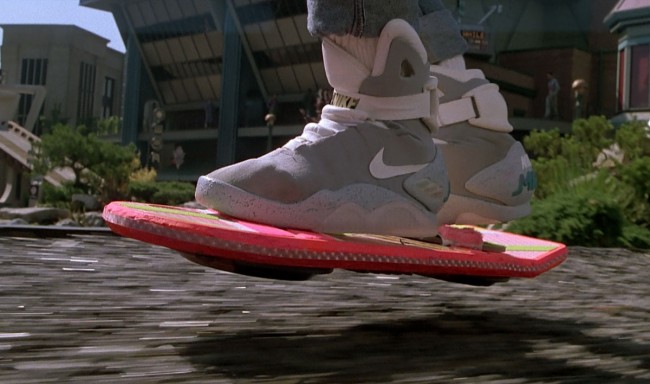 Back to the Future 2015 Predictions

“Roads? Where we’re going, we don’t need roads.” – Dr. Emmett Brown, Back to the Future

It’s been almost 25 years since Back to the Future II sent Marty McFly from 1985 to 2015 and unveiled its very bold (and sometimes overestimated) predictions about the world today. With the new year marking our official entry into “the future”, it’s time to take a look at a few of the things BTTF2 correctly AND incorrectly predicted about life in 2015…

There is a scene from the movie that shows news footage being filmed by a drone, a prediction we eventually saw come true during the Occupy movement and will most likely continue to see as they advance.

It seems that Apple may have pulled some inspiration from the popular sequel by first debuting the iPhone’s fingerprint scanner and then, Apple Pay, it’s thumbprint payment system that closely resembles the one in the movie.

Of the predictions that were made during Back to the Future II, the most notable were those involving the advancements in personal electronics. In the movie, Marty’s kids use “TV glasses” to answer the phone and watch videos, a concept very similar to that of the Google Glass and other wearable technology. They are also seen playing a hands-free video games, similar to the motion sensor technology found in Microsoft’s Xbox Kinect and Playstation’s EyeToy. In addition, BTTF2 introduced the idea of tablets and digital cameras.

Sadly, the closest thing we have to the hoverboards seen in the movie is Mattel’s limited edition, non-hovering lookalike from 2012. As for flying cars, they do, in fact, exist to some extent (they’re more like small airplanes than actual flying cars) but don’t expect them to be available to the general public anytime soon.

Back to the Future II may have been right about our culture’s obsession with 3D movies and sequels, but it failed to pinpoint today’s fashion trends and technological advances. Luckily, double ties and inside-out pants haven’t become popular (…yet) and self-drying jackets and shrink-to-fit clothing still remains to be seen (…if ever). However, possibly the most notable fashion prediction made in BTT2, the power-tying shoelaces or “Air MAGs, are actually said to be in the works for 2015. Here’s hoping…

While the film wasn’t completely off in regards to future communication, it definitely falls short by predicting the popularity of fax machines and phone booths—both of which came, went, and became obsolete in our lifetime). It also fails to highlight the advent of the Internet or mobile phones, which is odd given that brick-sized cell phones were already in use in 1989.